Valentine’s Day is just a few weeks away and it’s time to think about how you’re going to celebrate with that special someone. Gifts are always nice, but why not prepare an aphrodisiac meal for them? Who knows where it will lead (wink, wink)?

Aphrodisiac recipes have been cooked up throughout the world for centuries. You may have heard that oysters are an aphrodisiac — but what about potatoes, skink flesh, and sparrow brains? These things were once considered aphrodisiacs, too. Almost everything edible was, at one time or another. Some foods thought to be aphrodisiacs resemble genitalia – oysters, bananas – you get the picture. Short of taking Viagra which has been shown to effectively treat erectile dysfunction, aphrodisiac foods are those which possess vitamins, minerals and chemicals which stimulate desire. In actuality, foods which boost energy, stimulate attraction, fertility and promote blood flow to all important regions are believed to be effective in increasing sexual performance and satisfaction.

Aphrodisiacs get their name from Aphrodite, the Greek goddess of love, beauty, pleasure and sexuality. One account of her “birth” says she arose from the sea on a giant scallop, after Cronus castrated Uranus and tossed his severed genitals into the sea. Aphrodite then walked to the shore of Cyprus. Her name derives from aphros which means “foam” and refers to her as rising from the sea foam. She is always depicted nude and is often shown floating on a scallop shell.(In Roman mythology, Aphrodite is known as Venus, whose messenger is Cupid). In Ancient Greece during a festival to celebrate Aphrodite, participants were initiated into the Mysteries of Aphrodite and were given salt, a representation of Aphrodite’s connection to the sea, and bread baked in the shape of a phallus. The Aphrodisia festival is still held in Greece and Cyprus each year over a three day period in the summer.

Plump and moist, these sensuous pear-shaped fruits resemble certain parts of the body. They contain vitamin E which helps your body churn out hormones like testosterone, estrogen, and progesterone, which circulate in your bloodstream and stimulate sexual responses like clitoral swelling and vaginal lubrication.

Bananas are high in potassium which delivers muscle strength, so in theory intensifies orgasms.That’s something powerful to think about when you wrap your lips around this phallus-shaped fruit.

The chili pepper’s effect on the body has actual scientific backing, so there might be some truth to this one. Chili peppers contain capsaicin which can cause a physiological response – increased heart rate and metabolism, sometimes even sweating — that is quite similar to the physical reactions experienced during sex. Eating chili peppers also releases endorphins for that “feel good” sensation. Its bright red color is considered a symbol of love by many, and the shape is, well, self-explanatory.

Sinful and sweet, chocolate has been historically used in seduction rituals. Even Casanova was rumored to indulge in chocolate prior to a sexual rendezvous. Chocolate contains the chemicals anandamide and phenylethylamine, which boost serotonin levels – the chemical which occurs naturally in the body when someone is happy or feeling passionate. It also contains tryptophan, a brain chemical that yields serotonin, which is known to produce feelings of elation.

Some say ginseng is an aphrodisiac because it actually looks like the human body. (The word ginseng even means “man root.”) Studies have reported sexual response in animals which have been given ginseng, but there is no evidence to date of ginseng having any effect on humans.

Figs have for centuries been considered an aphrodisiac, and we’re not talking about Fig Newtons, but actual figs. If you’ve ever split a fig in half and checked out the inside, you’ll see why some have likened the pink fleshy insides to the female form. But aside from its appearance it does contain essential minerals and vitamins that could help kick things off in the sexual arena. The magnesium, potassium, and iron levels alone will help get you back online in these departments, and the Vitamin B-6 will give you energy to keep things going.

Nutty and sweet, maca is used in beverages, cookies and baked goods. This sweet root vegetable has been nicknamed Peruvian Viagra, and animal studies have indicated some aphrodisiac qualities, although this hasn’t been extensively tested on humans. It contains a steroid like chemical which is a precursor to sex hormones and is also thought to increase stamina and heighten awareness.

The most famous of aphrodisiac foods, oysters have a reputation for fertility. Research shows they are high in zinc, which science has linked to increased sperm production. Oysters also contain two unusual amino acids – D-aspartic acid and N-methyl-D-aspartate, both known to trigger the production of testosterone. Eating this libido-lifting treat raw ensures you get the greatest benefits of these amino acids, as cooking significantly reduces the amount. Oysters are eaten very seductively – you suck, slurp and eat them out of your hands, or someone else’s hands. See what I mean?

A little alcohol can dissolve inhibitions and put you in the mood. Red wine helps with relaxation and contains resveratrol, an antioxidant that helps boost blood flow and improves circulation before and during intercourse.

Salmon is loaded with omega-3 fatty acids which keep sex hormone production at its peak. The pink, velvety texture of a salmon fillet is also stimulating to the senses.

Earthy and black, truffles caused religious consternation in the days of the Arab empire. These precious fungi were banned from sale near mosques for fear they would corrupt the morals of good Muslims. Today, anything associated with luxury or indulgence is considered sexy – it must means she’s worth the extra expense, right?

So, light the candles, put on some soft, romantic music and incorporate the above foods into your menu. Cooking for your partner can serve as the best aphrodisiac of all.

These chocolate truffles are sinfully rich and delicious. 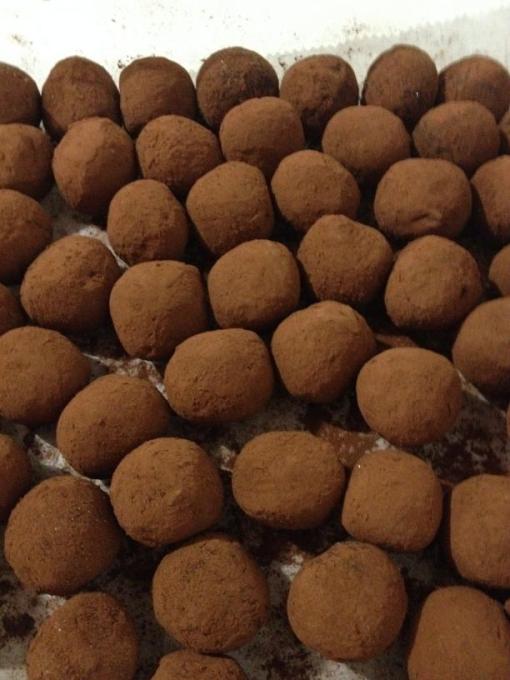 Sift powdered sugar and combine with chocolate, heavy cream, butter and egg yolks over low heat. Whisk constantly until smooth and chocolate has melted. Remove from heat and stir in peppermint extract. Chill 3-4 hours until firm enough to handle. Shape into small balls and roll in cocoa. Refrigerate until ready to serve. Makes: 36

Cook pasta in boiling, salted water according to package directions.

While pasta cooks, heat butter in a large skillet. Stir in heavy cream and truffle oil. Bring sauce to a low simmer. Season with salt and pepper to taste; add additional heavy cream or truffle oil, if desired. Drain pasta and toss with sauce. Garnish with shredded cheese.

The word truffle originated from the Latin term tuber, meaning “swelling” or “lump.” Truffles are subterranean fungi that grow in association with the roots of trees. They are round and warty and range in size from a couple of inches across to ones the size of a baseball.  The ones with which we are most familiar are the French black truffle (Tuber melanosporum) from the Périgord region of southwest France which has a blue-black exterior when fresh, fading to brown-black with age and a pungent, earthy odor, or the renowned odorous white truffle (Tuber magnatum) of Alba, in the Piedmont district of Italy which is solid, light-colored, and very brittle. They are also found in Sweden, New Zealand, Australian, Chile, Africa and in the Middle East, and have been recently been introduced in Oregon.

The first mention of truffles appears in the 20th century BCE in neo-Sumerian inscriptions and in the fourth century BC in writings of the Greek Theophrastus, a student of Plato and Aristotle. In classical times, their origins were a mystery and were thought to be the result of lightening, warmth and water in the soil. They were mentioned by the papal historian Bartolomeo Platina in 1481 and were served at the table of King Francis I of France during the Renaissance.

Truffles are harvested in Europe with the help of a female pig or truffle dog during September through May. The animals are used because they can detect the strong musky aroma of a mature truffle underground. Collecting truffles requires training and experience. A small hand rake or cultivator is used to gently uncover the soil near the base of suspected host plants.

The quantity of truffles harvested in Europe has consistently decreased each year. The New York Times reported that the decrease in production could be due to global warming. To ensure future production, appropriate tree seedlings (mostly oaks and hazelnuts in France and oak, hazel, poplar, and beech trees in Italy) have been inoculated with truffle spores, and when the sapling tree is established, it is transplanted to the proper environment, usually a barren, rock-strewn area. It takes about seven years before the first truffle begins to grow. A bearing tree will produce for about fifteen to thirty years. The Oregon truffles are being cultivated in association with the Douglas Fir.

Truffles have been used as culinary delicacies, aphrodisiacs and medicines.

As their flavor is heat-sensitive. truffles are eaten raw and unpeeled. Carefully wash with water and gently brush to remove any traces of soil. Dry with a paper towel.  They can be sliced or grated and added to cooked foods just before serving. The pungent aroma of a truffle permeates any food stored with it in a closed glass container.  Thus, a small amount can be added to oils and then used in various recipes. However, read the label if you purchase truffle oil as some sold today do not contain any truffles and are just olive oil infused with a chemical substitute.

Freedman, Louise. Wild About Mushrooms: The Cookbook of the Mycological Association of San Francisco.