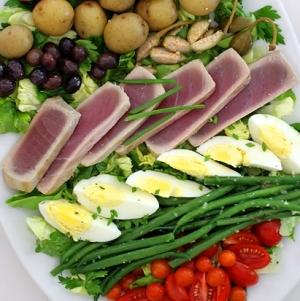 In a skillet over medium high heat, sear tuna steaks for 2 minutes on each side in olive oil. Remove from heat and slice each tuna steak into 1/4 inch slices. Line each cold plate with two romaine lettuce leaves and chicory, and then arrange the remaining ingredients on the lettuce. Overlap the tuna slices down the center of the plate and arrange the other vegetables on either side, using contrasting shapes, colors and textures to create an attractive presentation. (If you are using canned tuna – drain and divide tuna chunks among the plates.) Combine ingredients for dressing in small bowl and whisk until well-blended. Pour approximately ¼ c. of dressing over each salad. Serves 6.

Olives have been eaten for food since ancient times. Olive trees. with their oblong, silvery leaves, have been cultivated by humans for more than 8,000 years. They are native to Syria and Asia Minor, although most of our domestic olives come from California today. The olive branch was often a symbol of abundance, glory and peace. The leafy branches of the olive tree were ritually offered to deities and powerful figures as emblems of benediction and purification, and they were used to crown the victors of friendly games and bloody wars. Olive oil has long been considered sacred. Today, it is still used in many religious ceremonies. Over the years, the olive has been the symbol of peace, wisdom, glory, fertility, power and purity. The humble olive was inspiration for the following poem:

by A. E. Stallings

Sometimes a craving comes for salt, not sweet,
For fruits that you can eat
Only if pickled in a vat of tears—
A rich and dark and indehiscent meat
Clinging tightly to the pit—on spears

Of toothpicks maybe, drowned beneath a tide
Of vodka and vermouth,
Rocking at the bottom of a wide,
Shallow, long-stemmed glass, and gentrified,
Or rustic, on a plate cracked like a tooth,

A miscellany of the humble hues
Eponymously drab—
Brown greens and purple browns, the blacks and blues
That chart the slow chromatics of a bruise—
Washed down with swigs of barrel wine that stab

The palate with pine-sharpness. They recall
The harvest and its toil,
The nets spread under silver trees that foil
The blue glass of the heavens in the fall—
Daylight packed in treasuries of oil,

Paradigmatic summers that decline
Like singular archaic nouns, the troops
Of hours in retreat. These fruits are mine—
Small bitter drupes
Full of the golden past and cured in brine.

Olive trees are grown not from seeds, but rather from cut roots or branches buried in the soil and allowed to root, or grafted onto other trees. The olives are the fruit of the olive tree with a single, large seed inside. Green olives are usually picked at the start of the harvest season, in September and October in the northern hemisphere. They have a firm texture and lovely, nutty flavor. Black olives are picked in November and December, sometimes as late as January, and they’re softer, richer, and meatier. Olives are full of the compound oleuropein, which give them an intense bitterness. It’s the curing process that turns that bitterness into the flavors with the sweet, salty, pungent flavor, depending on the variety, with which we are familiar.

Olive curing is a lot like fermentation—it’s the conversion of the olive’s natural sugars into lactic acid. Harsh-tasting oleuropein and phenols get leached from the fruit in one of five ways.

Castelvetrano olives are Italy’s most popular snack olive. Bright green, they’re often referred to as dolce (sweet), and come from Castelvetrano, Sicily, from the olive variety nocerella del belice. They have a Kermit-green hue, meaty, buttery flesh, and a mild flavor.

These gigantic green olives are harvested in Cerignola, in Italy’s Puglia region, the heel of the boot. They are crisp and fantastically buttery. Their hefty size makes them easy to stuff with cheese.

These petite, jet-black olives from the south of France dry cured, then aged in brine. They are plump, wrinkly olives, a little bitter, and loaded with aromatic flavor.

Grown on a variety of olive tree called “Le Cailletier,” small Niçoise olives are a crucial ingredient in classic dishes of the French Riviera—like Salad Niçoise and tapenade. The Niçoise has an enticingly herbal fragrance with faint notes of licorice.

Also called Taggiasca olives, this petite variety is grown in Liguria, in Italy’s northwestern-most region, a few miles away from France’s Niçoise olive region, and the olives are indeed similar. They’re usually cured with an aromatic mixture of bay leaves, rosemary, and thyme.

These small, purplish-brown, wrinkled olives from Puglia have soft, tender flesh and a tart, citrusy taste. Gaetas can be either dry-cured (shrivelly, chewy) or brine-cured (plump, juicy).

These torpedo-shaped French green olives are wonderfully crisp and crunchy, with a tart, nutty, anise flavor.

Gordal means “fat one” in Spanish. These are big, fat olives, with plenty of firm, meaty richness. Grown in Andalucía, Spain, where tough Gordal trees thrive in the dry climate, these are beloved tapas olives.

While Alfonso olives are traditionally considered Chilean, the province of Tacna, in the foothills of the La Yarada mountains, where they originated, has been under Peruvian rule since 1929. These are huge, deep purple olives that are brine-cured, then macerated in red wine. They are supple, juicy and fleshy, with a hint of sour bitterness.

Although originating in Spain, Mission olive trees have flourished in California since the 1700’s. Most of the yield goes to make olive oil, but black oil-cured and green brine-cured table olives are both mild, grassy, and bright in flavor.

This familiar, friendly, oval-shaped olive from Spain is brine-cured, with a crisp texture and a slightly smoky, nutty flavor. They’re often stuffed with pimientos, or cracked and dressed with olive oil and fresh garlic.

Morocco produces hundreds of varieties of olives, but exports only a few. They are dry-cured and wildly, intensely flavorful.

From the hills by Delphi, the legendary home of the ancient Greek oracles, these hand-picked olives are harvested from their branches when very ripe. They are slowly brined to coax out a mild, fruity flavor and a melt-in-your-mouth softness.