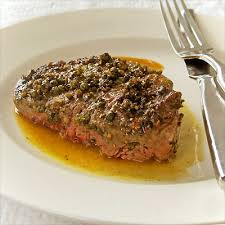 Sprinkle both sides of steak with crushed peppercorns. Press into steaks using fingers.  Add the butter and olive oil to a skillet and brown the steaks on both sides.  Steaks will be rare.  Cook longer if you want them more done. Transfer to hot serving platter.  To the juices in skillet, add remaining ingredients and simmer until thick.  Serve over the steaks. 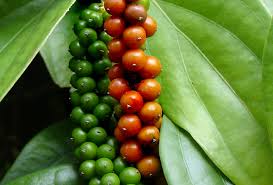 Pepper is a woody climbing vine that belongs to a genus of plants with the name Piper. The botanical name is Piper nigrum. They are grown on supporting trees, poles or trellises. The berries dandle in clusters from vines like dangling earrings. It takes several years for the vines to mature and they can reach 30 feet in length during that time. Pepper vines grow best in warm, humid tropic weather with well-drained soil. Pepper is native to Southeast Asia and Vietnam is currently the world’s largest producer and exporter, producing 34% of the world’s Piper nigrum crop.

Pink peppercorns (French: baie rose, “pink berry”) are dried berries of the shrub Schinus molle, commonly known as the Peruvian peppertree. As they are members of the cashew family, they may cause allergic reactions including anaphylaxis for persons with a tree nut allergy.

Pepper has been used throughout antiquity. Black peppercorns were found stuffed in the nostrils of Ramses II, placed there as part of the mummification rituals shortly after his death in 1213 BCE. The Romans used pepper as an integral part of their meals, primarily for health reasons.  Pepper was considered today’s equivalent of aspirin and was consumed  as a cure-all for numerous aches and pains to include cough, fever, snake bite, constipation, diarrhea.

Pepper was known in Greece since 4 BCE and was used in Indian cooking as early as 2BCE.

It is commonly believed that during the Middle Ages that pepper was used to disguise the flavor of rotting meat, but that may not be accurate. Meat and wild fowl was readily available to the wealthy who liked it seasoned with spicy sauces. Sugar was not widely available. Thus, pepper was combined with cinnamon and nutmeg to add fiery sweetness to the food.

English and Dutch vied for control of the port cities in India, Sumatra and Java to monopolize the pepper trade. It was more valuable than gold or silver and was used to pay taxes, customs duties and dowries. Land was even purchased with pepper! Members of the English East India Company, the first company in the world based on stock ownership, were called spicers, or pepperers, and imported an distributed spices.  These men formed guilds to protect their interests, the most important being the Pepperers’ Guild of London, which wielded considerable political power.

American pepper traders departing from Salem, Massachusetts in the 1800s made profits of 700 percent on the pepper trade and became the country’s first millionaires.  The Gardner Museum in Boston was founded by the daughter-in-law of John Lowell Gardner, a wealthy pepper merchant. Captain Jonathan Carnes, the son of a distinguished privateer during the Revolutionary War, returned from a trip to Sumatra and gave mementos of his journey (elephant’s tooth, golden boxes, assorted shells, pipes and other items) to the Salem East India Marine Society and inspired the Society to begin a “cabinet of curiosities” which was the foundation for the Peabody Essex Museum in Salem.

Pepper has been used throughout history as a seasoning for food and for its medicinal properties, particularly in Ayurvedic medicine, Hindu traditional or alternative medicine, which emphasizes plant-based treatments with exercise, yoga and meditation.

There are more than 300 studies citing pepper in PubMed, the database maintained by the National Library of Medicine in the US. Scientific studies in the US, Britain and Italy are also underway to test pepper’s potency as an anti-inflammatory and anti-microbial agent, an anti-cancer therapy, insecticide, preservative, anti-oxidant  and analgesic.

One tablespoon of ground black pepper contains moderate amounts of Vitamin K, iron, and manganese with trace amounts of other essential nutrients, protein and dietary fiber.

Shaffer, Marjorie: “Pepper: A History of the World’s Most Influential Spice”