Now that you know about all the health benefits of turmeric, prepare this citrus ginger turmeric mixture to have on hand the next time to feel a cold coming on. The lemon decreases the strength of the cold virus, the ginger soothes your throat after coughing, and the honey contains tryptophan which will help you sleep at night.

Mash the ginger root with a mortar and pestle to make a paste. Combine all ingredients in a jar and store in refrigerator for up to one month. To make a cup of tea, simply put a heaping tablespoon of the mixture into a tall mug and fill with boiling water.

Turmeric is an orange-colored spice native to India and Indonesia, revered for its culinary and therapeutic benefits. Turmeric gives the curry its bright yellow or orange color and contributes to its peppery, warm, and mildly bitter taste. It also provides a tangy and ginger-like fragrance.

Turmeric is a root crop known for its tough brown skin and bright orange flesh. For more than 5,000 years, this root crop has been cultivated in the tropical regions of Asia. During the 13th century, turmeric was introduced to western countries by Arab traders. Its popularity has slowly spread across the globe. Today, the leading producers of this aromatic spice are India, Indonesia, China, Taiwan, the Philippines, Haiti, and Jamaica.

Turmeric is arguably the most powerful herb on the planet at fighting and potentially reversing disease. It has so many healing properties that currently there have been 6,235 peer-reviewed articles published proving the benefits of turmeric.

Turmeric’s active ingredient is an extracted compound called curcumin. Among the health benefits of curcumin is reducing inflammation of the joints characteristic of arthritis. Other studies suggest that this powerful spice may also help protect us against breast, lung, stomach, liver, and colon cancer, heart disease and even Alzheimer’s disease by reducing some levels of beta amyloid plaque in the brain, a compound associated with cognitive decline.

Turmeric has the ability to improve the effects of diabetic medications and help in controlling the disease. It reduces the risks of developing insulin resistance, a physiological condition in which the cells fail to respond to the normal actions of the insulin hormone.

So for inflammation and more, it appears that turmeric could be the supplement you’ve been searching for. When searching for a turmeric supplement, however, be sure to choose one that includes the black pepper extract piperine. Without it, the curcumin that is ingested gets metabolized before it’s absorbed.

Our local Asian market in Portsmouth, NH sells turmeric rhizomes. You can make your own fresh turmeric powder by boiling, drying and then grinding the roots into a fine powder.

However, its deep color can easily stain, so quickly wash any area with which the turmeric has come into contact with soap and water. To prevent staining your hands, you might consider wearing kitchen gloves while handling turmeric.

Some people have reported allergic reactions to turmeric, especially after skin exposure. Typically this is experienced as a mild, itchy rash. People taking certain medications should also be careful when using turmeric in their food or supplementing with it. Turmeric may interfere with anti-coagulants like aspirin, and warfarin. It also can affect medications such as non-steroidal, anti-inflammatory drugs. As with any herb or supplement, use as directed.

So why wouldn’t you try this natural ingredient for better health? It could just be the “spice of life.” 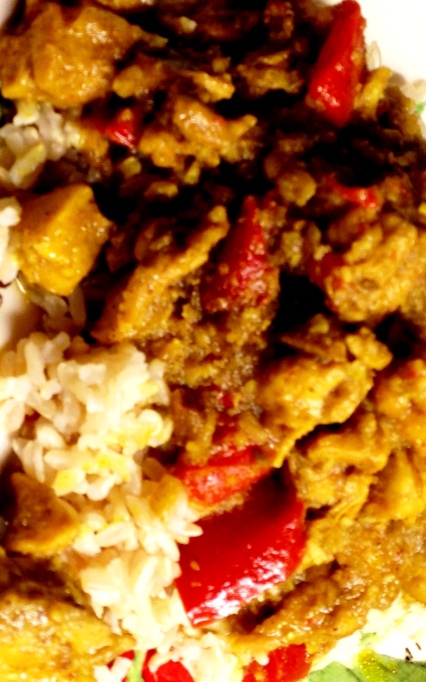 Fragrant and packed with a hint of spiciness, this chicken recipe will satisfy on a cool evening. Serve over jasmine or Basmati rice and garnish with plain, nonfat yogurt or chutney.

Spice paste:  To toast coconut, place coconut flakes in a skillet over medium heat and stir until golden on the edges. Combine coconut and all other ingredients in a blender or food processor.  Add 4-5 T. of water and blend until a smooth paste forms.  Set aside.