These seafood crepes are great for brunch too. Pair with a green salad and a crisp white wine.

For crepes – Combine all ingredients for crepes in bowl and beat until smooth. Cover and refrigerate for one hour to allow flour particles to expand an soften. Spray an 8 inch skillet with nonstick coating and heat over medium high heat. Measure about ¼ c. of the batter into the skillet and tilt the skillet to spread the batter evenly in a thin film. Cook one minute or until golden. Turn and cook about 30 seconds. Remove from skillet and stack between wax paper or parchment paper.

For filling – Sauté scallions and mushrooms in butter. Gently stir in seafood and set aside.

For sauce – Melt butter in sauce pan and blend in flour. Whisk in milk, chicken stock and sherry. Cook and stir until mixture bubbles and thickens.

To assemble, blend half the sauce into seafood. Place ¼ c. seafood mixture onto each crepe and roll up. Arrange in buttered baking dish. Spoon the remaining sauce over crepes. Sprinkle with cheese and sprinkle with paprika. Refrigerate until ready to bake. Preheat oven to 425oF. Bake for 20 minutes or until bubbling hot. Serves 6-8. 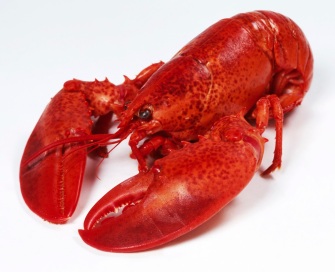 I love living on the Seacoast! My cottage is just a block from the beach and I get to hear the lobster boats go out in the early morning, just before the sun comes over the horizon. And did I mention lobsters? They are plentiful and inexpensive here.

Most of the lobsters we are familiar with are the cold water clawed marine crustaceans referred to as the “true” lobster, but there are tropical varieties as well which include the spiny lobsters and slipper lobsters (which have no claws), squat lobsters, and crayfish.

Lobsters are found in all oceans. They live on rocky, sandy, or muddy bottoms from the shoreline to beyond the edge of the continental shelf. They generally live singly in crevices or in burrows under rocks. They are omnivores and typically eat live prey such as fish, mollusks, other crustaceans, worms, and some plant life. They scavenge if necessary.

Lobsters are invertebrates with a hard exoskeleton, which means they have to molt as they grow. Lobsters, like snails and spiders, have blue blood due to the presence of hemocyanin which contains copper. In general, true lobsters are 10-20 inches long (although they can grow up to four feet long and weigh as much as 40 pounds), and move by slowly walking on the sea floor. However, when they flee, they swim backward quickly by curling and uncurling their abdomens. They live to be about 70 years old and are able to add new muscle cells at each molt. This longevity may be due to an enzyme that repairs long repetitive sections of DNA sequences at the ends of chromosomes, called telomeres.

Did you know that lobsters were once so plentiful that after a storm they would wash ashore in deep piles? They were gathered by hand until the mid-19th century when lobstermen started using baited, one-way traps with a color-coded marker buoy to mark cages. Cages are of plastic-coated galvanized steel or wood. A lobster fisherman may tend as many as 2,000 traps!

Once caught, lobsters are graded as soft shell (or shedders), hard-shell, or old-shell, soft shell lobsters have paper-thin shells and a poor meat-to-shell ratio, but the meat is very sweet. Hard-shell lobsters with firm shells, have more but with less sweet meat, so they command a higher price. Meanwhile, old-shell lobsters, which have not shed since the previous season have a coarser flavor. Culls are lobsters which have lost one of their claws. 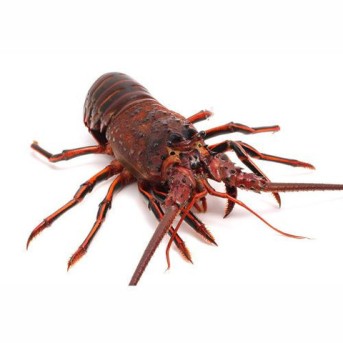 Spiny lobsters (langouste or rock lobsters) – Although they superficially resemble true lobsters in terms of overall shape and having a hard exoskeleton, they are distinguished from true lobsters by their lack of claws. They are found throughout all warm seas, especially in Australia, New Zealand, South Africa and the Bahamas.

Squat lobsters – These are flattened crustaceans which a long tail curled beneath their bodies. More than 900 species exist throughout the world’s oceans. They are plentiful off Baja, California, Mexico, South America and New Zealand. Flesh from these animals is often commercially sold in restaurants as “langostino” or sometimes dishonestly called “lobster” when incorporated in seafood dishes. As well as being used for human consumption, there is demand for squat lobster meat to use as feed in fish farms and shrimp or prawn farms. This is in part because they contain a pigment that helps to color the meat of farmed salmon and trout.

Crayfish (crawfish, crawdads) – Crayfish are freshwater crustaceans resembling small lobsters. Some species are found in brooks and streams where there is running fresh water, while others thrive in swamps, ditches, and rice paddies. Generally only the tail portion is eaten, except at crayfish boils, where the entire body is served. Like all crustaceans, crayfish are not kosher because they are aquatic animals that do not have both fins and scales. Crayfish are also commonly sold and used as bait.

In Colonial times, lobster was fed to pigs and goats and only eaten by prisoners, indentured servants or paupers. In North America, the American lobster did not achieve popularity until the mid-19th century, when New Yorkers and Bostonians developed a taste for it. American lobster was initially deemed worthy only of being used as fertilizer or fish bait, and until well into the 20th century, it was not viewed as more than a low-priced canned staple food.

Native Americans ate lobsters after wrapping them in seaweed and baking them over hot rocks. We usually boil or steam lobsters today. The most common way of killing lobsters is by placing them live in boiling water or to split the lobster or sever the body in half lengthwise. Lobsters may also be killed immediately before boiling by a stab into the brain, in the belief that this will stop suffering. The boiling method is illegal in some places, such as in the Reggio Emilia region of Italy, where offenders face fines up to €495. When a lobster is cooked, its shell’s color changes from blue to orange because the heat from cooking breaks down a protein which suppresses the orange hue of another chemical which is also present in the shell.

Prepare seafood. Remove cooked lobster meat from shells and cut into 2-inch pieces and set aside.  Scrub shells of clams and mussels to remove any dirt. Cut fish fillet into 2-inch pieces and set aside. Peel and devein shrimp.  Rinse scallops. Sauté the onion, celery and garlic in olive oil in a large stock pot over medium high heat.  Add tomatoes, bay leaf, saffron and salt and pepper.  Add stock and bring to a boil.  Reduce heat and simmer, uncovered for 20 minutes or until some of the liquid is reduced to concentrate the flavor.  Add seafood, cover and simmer for 5-10 minutes until fish and scallops are opaque, shrimp is pink, and the mussels and clams are opened wide. Serve with crusty garlic toast, Caesar salad and a crisp white wine, like Sauvignon Blanc or Chardonnay. Serves 6.

Cut lobster tails into 1-inch pieces.  Peel and devein shrimp. Saute scallops, lobster and shrimp in skillet over medium heat with olive oil until opaque.  Remove from heat and set aside. In sauce pan over medium heat, bring marinara sauce to boil and gradually stir in vodka and cayenne. Reduce heat and simmer for 15 minutes.  Gradually whisk in cream and heat through.  Add seafood to sauce.  Prepare pasta according to directions.  Drain and add to seafood mixture.  Serve with freshly grated parmesan cheese. Serves 4.

4 hearts of romaine, torn (about 8 cups)

These lobster tacos make great appetizers with taco shells made from won ton wrappers! You can make them full size as well for a meal using regular corn tortillas. 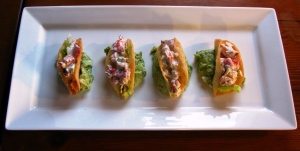 To make chipotle cream: Combine all ingredients in a small bowl and whisk until smooth.

To make lobster salad: Cut open the lobster shells with a sharp knife and remove the lobster meat. Cut the lobster meat into bite-sized chunks. Place in a medium bowl and add celery, 1 c. chipotle cream and black pepper to taste. Stir to combine.

To make guacamole: Halve avocadoes, remove seed and use a spoon to scoop out the pulp. Place in a small bowl and mash with a fork. Add lemon juice, onion, garlic salt, and mayonnaise. Set aside.

Using a 2-inch round cookie cutter or the bottom of a glass, cut the won ton wrappers into circles. Heat vegetable oil for frying. Place the won ton rounds into the oil, 2-3 at a time. Using two forks, gently fold them in half in the oil and allow to cook for 6-8 seconds. Remove and drain. Continue folding and frying the rest of the won ton wrappers. To assemble: Place a small amount of shredded lettuce in the won ton “taco shell.” Add a generous tablespoon of lobster salad. On a plate, place four small mounds of guacamole (about 1 T. each). Set the lobster tacos onto each mound to keep it upright and serve. Makes 30 appetizers.

We traditionally have lobster and Caesar salad for New Year’s Eve but I made bouillabaisse this year.  It was such a hit with family and friends that I will do it from now on. Saffron is the world’s  most expensive spice, but it makes all the difference in this recipe so don’t skip it.  Enjoy!

Prepare seafood. Remove cooked lobster meat from shells and cut into 2-inch pieces and set aside.  Scrub shells of clams and mussels to remove any dirt. Cut fish fillet into 2-inch pieces and set aside. Peel and devein shrimp.  Rinse scallops. Sauté the onion, celery and garlic in olive oil in a large stock pot over medium high heat.  Add tomatoes, bay leaf, saffron and salt and pepper.  Add stock and bring to a boil.  Reduce heat and simmer, uncovered for 20 minutes or until some of the liquid is reduced to concentrate the flavor.  Add seafood, cover and simmer for 5-10 minutes until fish and scallops are opaque, shrimp is pink, and the mussels and clams are opened wide. Serve with crusty garlic toast, Caesar salad and a crisp white wine, like Sauvignon Blanc or Chardonnay. Serves 6.