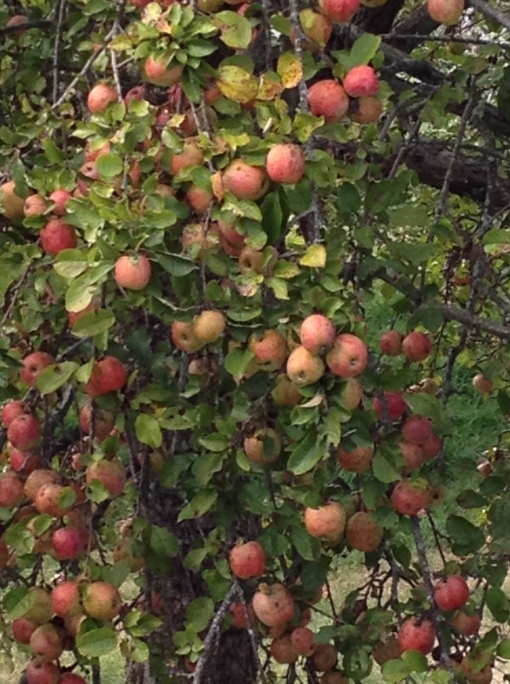 Apples are the fruit of the apple tree (Malus domestica) a deciduous tree which is a member of the rose family. Archeologists have found evidence that humans have been enjoying apples since at least 6500 B.C. The apple tree originated in Central Asia in southern Kazakhstan, Kyrgyzstan, Tajikistan, Xinjiang, China. Apples were brought to North America by Europeans, and the first apple orchard on the North American continent was planted in Boston by Reverend William Blaxton in 1625. In colonial times, apples were called “winter banana” or “melt-in-the-mouth.”

Apples appear in many religious traditions, often as a mystical or forbidden fruit. For instance, in Greek mythology, the Greek hero Heracles, was required to travel to the Garden of the Hesperides and pick the golden apples off the Tree of Life growing at its center. The Greek goddess of discord, Eris, became disgruntled after she was excluded from the wedding of Peleus and Thetis. In retaliation, she tossed a golden apple inscribed with “Kaliste” meaning ‘For the most beautiful one’, into the wedding party. Three goddesses claimed the apple: Hera, Athena, and Aphrodite. Paris of Troy was appointed to select the recipient. After being bribed by both Hera and Athena, Aphrodite tempted him with the most beautiful woman in the world, Helen of Sparta. He awarded the apple to Aphrodite, thus indirectly causing the Trojan War. In Norse mythology, the apple is linked to eternal youthfulness. Though the forbidden fruit of Eden in the Book of Genesis is not identified, popular Christian tradition has held that it was an apple that Eve coaxed Adam to share with her. As a result, in the story of Adam and Eve, the apple became a symbol for knowledge, immortality, temptation, the fall of man into sin, and sin itself. The larynx in the human throat has been Adam’s apple because of a notion that it was caused by the forbidden fruit remaining in the throat of Adam.

There are more than 7,500 varieties of apples. The science of growing apples is called “pomology.” Because apples do not breed true when planted as seeds, grafting is generally used to produce new apple trees. The rootstock used for the bottom of the graft can be selected to produce trees of a large variety of sizes, as well as changing the winter hardiness, insect and disease resistance, and soil preference of the resulting tree. The skin of ripe apples is generally red, yellow, green, pink, or russetted although many bi- or tri-colored varieties may be found. Apple trees must cross-pollinate to develop fruit, and honey bees are most commonly used.

If you like the apples made by a particular tree, and you want to make more trees just like it, you have to clone it: Snip off a shoot from the original tree, graft it onto a living rootstock, and let it grow. This is how apple varieties come into existence. Every McIntosh is a graft of the original tree that John McIntosh discovered on his Ontario farm in 1811, or a graft of a graft. Every Granny Smith stems from the chance seedling spotted by Maria Ann Smith in her Australian compost pile in the mid-1800s.

About 63 million tons of apples were grown worldwide in 2012, with China producing almost half of this total. The United States is the second-leading producer, with more than 6% of world production. The apple variety ‘Red Delicious’ is the most widely grown in the United States with 62 million bushels harvested in 2005.

Commercially grown apples are packed in 40-pound fiberboard cartons (most packers put in at least 42 pounds to accommodate a little moisture loss in shipment). And they are designated by count — the number of apples in each carton. The largest packed size is 48, which means there are 48 apples in each box — a very large piece of fruit.

Until the 20th century, farmers stored apples in frost-proof cellars during the winter for their own use or for sale. Improved transportation of fresh apples by train and road replaced the necessity for storage. In the 21st century, long-term storage again came into popularity, as “controlled atmosphere” facilities were used to keep apples fresh year-round. Controlled atmosphere facilities use high humidity, low oxygen, and controlled carbon dioxide levels to maintain fruit freshness. For home storage, most varieties of apple can be held for approximately two weeks when kept at the coolest part of the refrigerator (i.e. below 5 °C). Some types, including Granny Smith and Fuji, can be stored up to a year without significant degradation.

According to the U.S. Department of Agriculture, a typical apple serving weighs 242 grams and contains 126 calories with significant dietary fiber and a modest amount of Vitamin C. Many beneficial health effects are thought to result from eating apples; however, two types of allergies are attributed to various proteins found in the fruit. One form of apple allergy, often found in northern Europe, is called birch-apple syndrome, and is found in people who are also allergic to birch pollen. In other areas, such as the Mediterranean, some individuals have adverse reactions to apples because of their similarity to peaches. 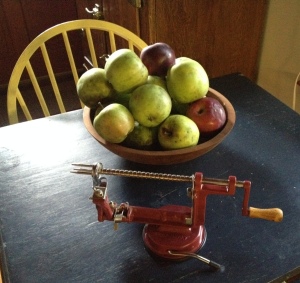 Apples are often eaten raw, but can also be found in many prepared foods (especially desserts) and drinks. Apples can be canned or juiced. They are often eaten baked or stewed, and they can also be dried and eaten or reconstituted (soaked in water, alcohol or some other liquid) for later use. Apples are cooked to make applesauce, apple butter and apple jelly. They are milled or pressed to produce apple juice, which may be drunk unfiltered (called apple cider in North America), or filtered. The juice can be fermented to make cider (called hard cider in North America), and vinegar. Through distillation, various alcoholic beverages can be produced, such as applejack, Calvados and apfelwein. McIntosh and Granny Smith apples are considered the best apples for baking.