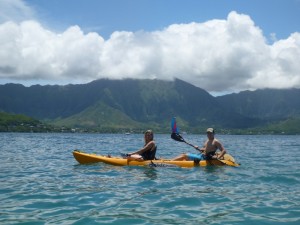 My last post in the “52 Weeks of Food” series was a little delayed because I have been in Hawaii visiting our son, Eric, and his wife Donna. I had a wonderful time hiking in the jungle past waterfalls, kayaking, snorkeling, browsing through the Asian Market, touring an historic mansion near Diamond Head, sampling products at the Kailua Farmer’s Market and indulging in some amazing cuisine at the local restaurants.

One night we ate at a Moroccan restaurant, Casablanca, in Kailua. It was like stepping into an “Arabian Nights” fantasy! I sat on a low bench in the Oriental carpet draped room lit by hanging lanterns and Eric and Donna sat on chubby leather ottomans. The meal began when our server poured warm water over our hands over a silver catch basin and handed us terrycloth towels. 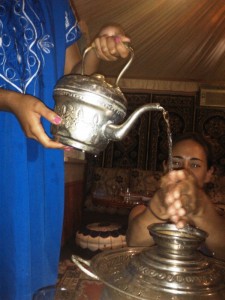 The towels also served as our napkins. Our first course was Harira Soup, made with tomatoes, lentils and/or chickpeas, saffron, parsley and coriander. Next followed a Moroccan Salad plate of creamy hummus dip, light tabbouli salad, rich eggplant, bright roasted bell peppers, tart tomatoes and flavorful carrots served with wedges of fresh-baked flat bread. My favorite course was the B’stilla, a savory pastry, flaky outside, dusted powdered sugar and cinnamon, with a moist, hot interior of finely shredded chicken, chopped almonds and eggs. I had lamb with honey and almonds as my main course and we were pretty full by the time dessert arrived – a deep-fried honey dipped funnel cake and hot cinnamon tea.

The highlight of the trip was a birthday celebration at Alan Wong’s restaurant in Honolulu where Eric had arranged for us to sit at the “Chef’s Table,” which was actually a special location (for one dining party only) in full view of the kitchen where we could observe the culinary artistry and ask questions of the chefs. 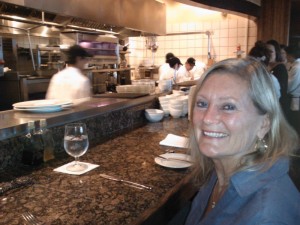 At the Chef’s Table

One of the more interesting appetizers, “Poki-Pines” consisted of Crispy Won Ton Wrapped Ahi Tuna Poke Balls (pronounced poh-kay), Avocado, and Wasabi Sauce. What made them resemble porcupines was the clever way they were deep friend which made strips of won ton wrappers stand up in the air like quills. We also watched them serve the evening’s “Soup and Sandwich” appetizer, which initially had sounded awfully filling. In reality, the chilled tomato soup was served in a martini glass with a piece of lavash (thin flat bread) balanced on the rim of the glass topped with a small grilled cheese and Kahlua pork sandwich. The chilled tomato soup and chilled cream were squeezed simultaneously side-by-side in the martini glass – the separation of the white and red in the glass was beautiful and was swirled at the top to create a yin-yang design!

What did I order? Ginger Crusted Onaga (Red Snapper) with Miso Sesame Vinaigrette, Organic Hamakua Mushroom & Corn, which was moist and flavorful. 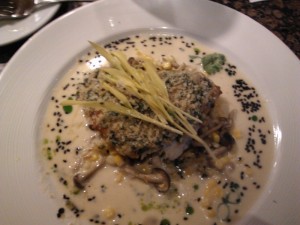 And for dessert I couldn’t resist “The Coconut”
which was Haupia (coconut) Sorbet in a Chocolate Shell served with tropical fruit and Lilikoi (passion fruit) sauce. 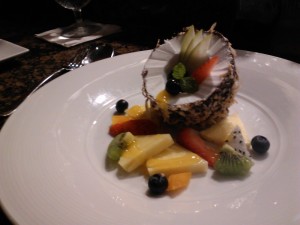 Following our meal, I was presented with an autographed copy of the menu!