My day in the kitchen was beginning to follow a routine.  When I first arrived at the hotel, I changed into my uniform and then got a cup of espresso from Domenico.  He was the barista for the restaurant.  Then I donned a fresh apron and started working. 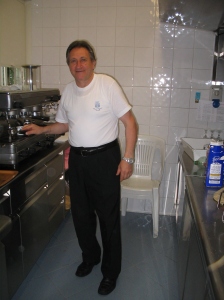 In the mornings we did a lot of prep work.  At first I thought they were giving me all the tomatoes to dice, carrots and potatoes to peel and zucchini to shred with the mandoline because I was the intern or apprentice (or maybe a woman?).  But I looked around and noticed that everyone was dicing and slicing ingredients for the day’s recipes.  Chef posted the daily specials on the bulletin board along with that day’s employee menu.  We washed lettuce, separated basil, made tomato sauce, cleaned fish and grated Parmigiano cheese each morning.

After the employee lunch, I changed into a clean apron and followed the other chefs through the main dining room and hotel lobby to the elevator etched into the rocky hillside at the back of the hotel.  We traveled down several levels to the restaurant. The restaurant by the pool is open air with views of theMediterranean. Tables are set with white table cloths and flowers. Hanging baskets adorn the thatched roof. They serve about 50-60 people during lunch service and guests dine in pool attire. White jacketed waiters (no waitresses) took the orders and brought them to an open counter that separated the smaller kitchen from the open air dining room. They read out the orders in Italian and then place the order slip under a paperweight on the counter.  One chef manned the brick pizza oven and grill, another handled all the cold salads and appetizer plates, one assembled the desserts and Alessandro was in charge of preparing the pasta and main dish.

“Let me show you how to make an Italian pizza.”  Alessandro said as lunch service ended. He led me over to the alcove in the dining room where the brick oven was located.

“This is our pizza oven.  It is made of brick and is fired by wood.  It is supposed to keep an even temperature, but it has a crack in it and cooks unevenly.”  He opened a refrigerated, stainless steel drawer beneath the oven and extracted a round ball of pizza dough.  Alessandro flattened it with his hands and carefully rolled it out with a marble rolling pin.

“I thought you were supposed to toss it in the air,” I said.

He smiled, “That is only in the movies.”  He spread sliced tomatoes on the flattened round of dough and adorned it with fresh mozzarella cheese.  Alessandro scooped it up with a flat, wooden paddle and inserted it into the oven near the hot coals.  We watched the cheese melt and he turned it slightly to keep the crust from burning.  Then he removed it with the wooden paddle and placed it on the counter.  Alessandro sliced the pizza with a sharp knife and handed me a piece.

“This is Pizza Margherita,” he said. It was delicious!

When I returned to Positano, I always went down to the internet cafe to check my email.  Brandi was using the computers at the internet café when I got there after work.  We talked for a few minutes and she told me what her kids were doing. I purchased a bottle of water and found a stool in front of a computer.

Craig emailed that he had been spending a lot of time working on our lawn and clearing a path down the hillside behind our property to the beach. He sounded resentful that I wasn’t there to help and seemed to indicate that he was working hard while I was having fun. Although I felt a little guilty about not being there helping, I decided not to address his complaints. Instead, I complimented him on all the work he was doing. I told him what I’d been doing in the kitchen and thanked him again for encouraging me to become a chef.

After answering emails, I headed back up the stone steps that would take be to the apartment. I found our neighbor Paulo watering the vegetables and flowers in his garden.  Paulo was in his mid-70s – short and wiry, his skin was like tanned leather and he always had a smile on his face. He was the one who had planted basil in lieu of grass in our front yard, and he regularly harvested the huge lemons from the trees that shaded the laundry on our clotheslines. 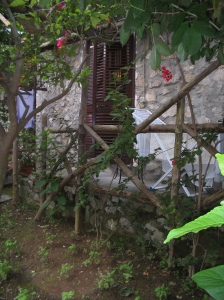 Basil & lemons in our front yard

“Molto bene. Very well. I have been making limoncello.” He turned off his hose and asked, “Have you tried it? Let me pour you a glass of my homemade recipe,” he offered as he invited me into his apartment. Paulo told me his recipe started with grain alcohol as he poured me a tiny little glass of the chilled liquid. Whoa!  It was like fire going down and made my eyes water.

“Oh,” I choked. “That tastes nice and lemony.” It was not as smooth as the limoncello we had purchased for the apartment, and it was the nicest thing I could think of to say.

Posted by Marcia Steidle. Categories: My Stories. Leave a comment