Coriander is considered both an herb and a spice since both its leaves and its seeds are used as a seasoning condiment. The Coriander plant is grown as annual which requires well-draining, fertile soil supplemented with warm summer climates to flourish. For leaf coriander, the plant is allowed to reach only about 9 to 15 inches in height. If left to grow further, it may reach about 5-7 feet tall, bears small white or light pink flowers by midsummer, followed by round-oval, numerous, aromatic coriander seeds. Flowering coriander is often planted in a flower or vegetable garden as it repels aphids.

The use of coriander can be traced back to 5,000 BC, making it one of the world’s oldest spices. It is native to the Mediterranean and Middle Eastern regions and has been known in Asian countries for thousands of years. Coriander was cultivated in ancient Egypt and was mentioned in the Old Testament. Ancient Grecians used cilantro essential oil as a component of perfume and the Romans used it to preserve meats and flavor breads. Early physicians, including Hippocrates, used coriander for its medicinal properties, such as an aromatic stimulant. 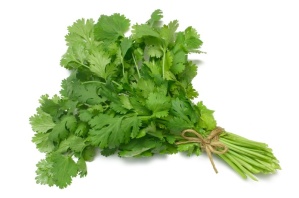 Fresh coriander leaves are used as an herb, and are known as cilantro, or Chinese parsley, and bear a strong resemblance to Italian flat leaf parsley. The leaves are broadly lobed at the base of the plant, and slender and feathery higher on the flowering stems with a citrusy flavor, which is stronger in the stems, so they should be chopped and added to recipes as well. Heat diminishes the flavor, so coriander leaves and stems should be used raw or added to the dish immediately before serving. The fresh leaves are an ingredient in many savory dishes in South Asian foods, Chinese and Thai dishes, Mexican cooking, and in salads in Russia. Chopped coriander leaves are a garnish on Indian dishes such as dal. The Portuguese are the only Europeans who continue to use cilantro as much as they did in the 16th century – combining it with chilies and huacatay (black mint) to produce a distinctive table sauce, and pared with potatoes and fava beans.

The fruit of the coriander plant contains two seeds which, when dried, are the parts that are used as the dried spice. When ripe, the seeds are yellowish-brown in color with longitudinal ridges. They have a fragrant flavor that is reminiscent of both citrus peel and sage. Coriander seeds are available in whole or ground powder form. Roasting or heating the seeds in a dry pan heightens the flavor, aroma and pungency. Coriander is commonly used in Middle Eastern, Mediterranean, Indian, South Asian, Mexican, Latin American, Chinese, African and Southeast Asian cuisine. In Germany and South Africa, the seeds are used while making sausages. In Russia and Central Europe, coriander seed is an occasional ingredient in rye bread. The Zunis of North America have adapted it into their cuisine, mixing the powdered seeds ground with chilies and using it as a condiment with meat, and eating leaves as a salad. Coriander seeds are also used with orange peel to add a citrus character in brewing certain styles of beer, particularly some Belgian wheat beers.

The herb parts (leaves, root, and stem) of the cilantro (coriander) plant have been found to have many antioxidants and essential oils that have been used as analgesics, aphrodisiacs, antispasmodic medicines, deodorants, and digestive aids. Recent research (although done on rats and mice) has shown coriander to control blood sugar and to lower LDL cholesterol levels.