When the weather is crisp and there is snow on the ground, what warms us up better than a steaming cup of coffee? We all have our favorite coffee houses. Breaking New Grounds is a coffee shop that anchors a corner in the seaside town of Portsmouth, NH. Yes, we have a Starbucks in town (in fact, it’s just down the street), but Breaking New Grounds is my favorite coffee shop. They offer a selection of coffees from around the world, fabulous desserts, and gelato. It’s a gathering spot for locals and visitors alike and offers both indoor seating as well as outside tables, which hardy local souls actually frequent in the winter. 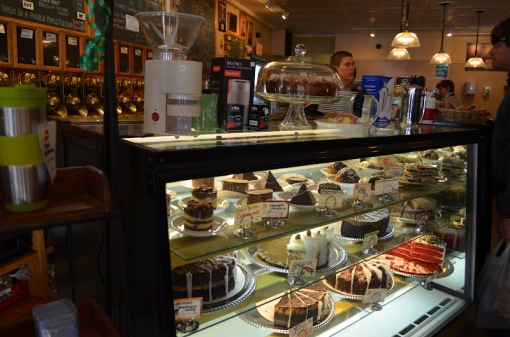 Coffee is a brewed drink made from roasted coffee beans, which are the seeds of berries from the Coffea plant. The two most commonly grown coffee beans are the highly flavorful Arabica and the less sophisticated but stronger and more caffeinated Robusta. Once ripe, coffee beans are picked, processed, and dried. Once shipped, the beans are roasted at 500 degrees. After a few minutes the bean will pop and double in size. A few minutes after that, the bean will pop again signifying that the roasting is complete. Roasted beans are ground and brewed to produce coffee as a beverage.

Legend has it that a 9th century Ethiopian goat herder first became aware of coffee when his goats became frisky after eating coffee berries. The earliest credible evidence of coffee-drinking appears in the middle of the 15th century in Yemen shrines. Coffee was used in local religious ceremonies in both Yemen and in the Horn of Africa. Coffee traveled from the Middle East to Venice, Italy and from there it spread throughout Europe. Coffee became popular in England when it was introduced by the British East India Company. Oxford’s Queen’s Lane Coffee House, established in 1654, is still in existence today. Did you know that before coffee caught on in the U.S., beer was the breakfast drink of choice? Americans did enjoy a cup of tea, but after the War of 1812, during which Britain temporarily cut off access to tea imports, Americans also developed a taste for coffee

The traditional method of planting coffee bushes was to place 20 seeds in each hole at the beginning of the rainy season. However, about half of the seeds fail to sprout. A more effective method of growing coffee, used in Brazil, is to raise seedlings in nurseries that are then planted outside at six to twelve months. About three-quarters of coffee cultivated worldwide is the Arabica variety.

Second only to oil, coffee is the world’s second most traded commodity, with about half a trillion cups drank per year. Not only used for brewing a cup of java, the coffee bean provides caffeine for beverages (cola), pharmaceuticals, and cosmetics. Brazil, Vietnam and Columbia produce most of the world’s coffee beans. Hawaii is the only state in the US that grows coffee.

Want to dry something different the next time you visit a coffee shop? Order one of these.

Americano: Also known as “Lungo” or “Long Black” and made by diluting 1-2 shots of espresso with hot water in order to approximate the texture, flavor and body of an American-style drip coffee. It was apparently created as a sort of insult to Americans who wanted their Italian espresso diluted.

Caffe Mocha: A combination of chocolate syrup and a shot of espresso, topped with steamed milk and a layer of micro-foam. Finish it with a sprinkle of chocolate.

Cappuccino: Steamed foamed milk poured over coffee and finished by topping with foam and a sprinkle of chocolate powder. The name “cappuccino” comes from the resemblance of the drink to the clothing worn by Capuchin monks.

Cortado: An espresso with equal amounts of coffee and steamed milk.

Macchiato: Means “stained” with a bit of foam. A touch of steamed foamed milk is added to a double shot of coffee.

Red Eye: Drip coffee with a shot of espresso.

Coffee Around the World

In Italy espresso is the drink of choice. The term espresso literally means “when something is forced out.” It is not a type of coffee, but rather the way that coffee is prepared – shooting pressurized hot water through ground coffee. Espresso is regulated by the Italian government because it is considered essential to the Italian daily life. Brewed espresso has 2.5% fat, whereas brewed coffee has 0.6% fat. The average age of a barista in Italy is 48 and it is recognized as a very respectable profession.

In 1857 the French introduced coffee to Vietnam where it is brewed with a single-serving metal filter called a phin which rests over a cup that holds spoonfuls of sweetened condensed milk. Then the mixture is stirred and poured over ice.

In Hong Kong, coffee is blended with black tea and sweetened condensed milk to make a beverage called yuanyang.

In Turkey, coffee is grinded, boiled with water and sweetened.  It is very strong in general, and leaves a mud at the bottom of the cup.  After you finish your coffee, turn the cup upside down, and let the coffee mud drip for about two minutes.  Turn it back up, and have a fortune teller tell you fate according to the ‘paths’ and shapes of the coffee.   If your fortune teller is a gypsy with blue eyes, you fortune is deemed to be more credible.

The Swedish are some of the largest coffee consumers, probably due to their tradition of a daily coffee break or fika, where coffee is accompanied by a sweet pastry.

In ancient Arab culture, there was only one way a woman could divorce – if her husband didn’t supply enough coffee.

Sixteenth century Muslims banned coffee because of its stimulating properties.

The French philosopher Voltaire is said to have consumed 50 cups of coffee per day, and Teddy Roosevelt drank a gallon of coffee a day! But not to worry, the lethal dose of caffeine is equal to approximately 100 cups per day.

Johann Sebastian Bach wrote an opera about a woman who was addicted to coffee.

The world’s most expensive coffee at $600 lb is Kopi Luwak, which is derived from beans eaten and excreted by a Civet, a Sumatran wild cat.