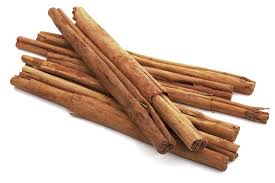 Cinnamon is the bark of the laurel tree (C. Zeylanicum) which historically was grown only in Ceylon (Sri Lanka.) Today cinnamon is grown more commonly from the C. Cassia tree. which is cultivated in India, Sumatra, Java, Brazil, Vietnam, The West Indies, Egypt, Zanzibar, and Madagascar.

The history of cinnamon dates back to about 2800 BC where it can be found referenced as kwai in Chinese writings.

In Rome in AD 65, the Emperor Nero is said to have burned a year’s worth of the city’s supply at the funeral for his wife Poppaea Sabina  (perhaps as a way to mask the odor of her dead body), although cinnamon was too expensive to be used regularly on funeral pyres.

The ancient Egyptians used it in embalming mummies because of its pleasant odors and preservative qualities. Cinnamon is also mentioned in the Bible – In Proverbs as a perfume mixed with myrrh and aloe and in Exodus blended with myrrh and olive oil as a holy anointing oil used by Moses.

The first mention of the spice growing in Sri Lanka was in “Monument of Places and History of God’s Bondsmen,” an Islamic medical manuscript, in about 1270 and in a letter from John of Montecorvino, an Italian missionary, dated 1292.

Indonesian rafts transported cinnamon (known in Indonesia as kayu manis- literally “sweet wood”) on a “cinnamon route” directly from the Moluccas to East Africa, where local traders then carried it north to the Roman market. Arab traders brought the spice overland trade to Alexandria in Egypt, where it was bought by Venetian traders from Italy who held a monopoly on the spice trade in Europe. Due to the high cost of ship building and the risks inherent in sea voyages, plus a virtual monopoly on the overland trade route by the Venetians, only the elite could afford to use it.

Portuguese traders landed in Ceylon at the beginning of the sixteenth century and restructured the traditional production and management of cinnamon by the Sinhalese, who later held the monopoly for cinnamon in Ceylon. In 1518 they established a fort on the island and protected their own monopoly for over a hundred years.

Dutch traders established their own trading post in 1638, took control of the factories by 1640, and eliminated the remaining Portuguese by 1658. “The shores of the island are full of it”, a Dutch captain reported, “and it is the best in all the Orient: when one is downwind of the island, one can still smell cinnamon eight leagues out to sea.” The Dutch East India Company revamped harvesting methods in the wild and eventually began to cultivate its own trees. In 1767, Lord Brown of East India Company established Asia’s largest cinnamon estate and a few years later, in 1796, the British took control of the island. However, the importance of cinnamon had begun to decline with coffee, tea, sugar, and chocolate replacing its popularity.

In Sri Lanka, cinnamon is grown on the coastal plains south of Colombo.  After the tree is grown for two years, it is cut down. The next year, little shoots appear. During the rainy season, these shoots are cut at the base and peeled of their thin inner bark. The cinnamon curls naturally and dries within a couple of hours of being cut. Cinnamon rolled from the thick bark of the cassia plants do not show multiple layers of any kind. Ceylon cinnamon quills, however, may show multiple layers of a thinner bark.

Cinnamon is graded according to its thickness and include classes called Continental, Mexican, or Hamburg. Quillings, which are quills broken in handling, featherings, which are the small inner pieces of bark too small to use in quills, and shavings known as chips are further grades of cinnamon.  Generally featherings and chips are used to produce ground cinnamon. Cinnamon quills can be stored for 2-3 years if stored in an airtight container.

In traditional Chinese medicine, Cassia cinnamon is used for colds, flatulence, nausea, diarrhea, and painful menstrual periods. It’s also believed to improve energy, vitality, and circulation and be particularly useful for people who tend to feel hot in their upper body but have cold feet.

Though not fully understood in ancient times, we now know that cinnamon has anti-microbial and anti-clotting properties. Recent studies show additional health benefits to include controlling blood sugar, improving colon and heart health and boosting brain power. These benefits are attributed to 3 main essential oils found in this bark – cinnamyl alcohol, cinnamyl acetate, and cinnamaldehyde  as well as naturally-occurring courmarin. (Coumarin is a blood thinner which is also found in celery, chamomile, sweet clover, and parsley.)

It is thought by some that simply smelling cinnamon can improved cognitive function –  improved attention, working memory, virtual recognition memory, and motor speed.

Cinnamon is one of the most popular spices – especially for baking – and can be found in breakfast rolls, cakes, cookies and ice cream. Cinnamon adds zing to vegetables like squash, pumpkin and carrots as well as fruits like apples, pears and bananas. It is used widely in Caribbean, Mexican, African, Greek and Indian cooking and is used in savory dishes like lamb and chili. Cinnamon reduces the acid in recipes using tomatoes (Try adding a pinch to homemade spaghetti sauce.)