The Italian meal is a time when family and friends connect. The big meal of the day is usually around 1 or 2 PM and can last a couple of hours. It is composed of several courses and begins with Antipasti (appetizers) and is followed by the Primi Piatti (first plate—usually a pasta dish), a Secondi Piati (second plate—meat and vegetables), Insalata (salad) and is finished with Dolci (dessert.) Occasionally fruit and cheese follow the dessert. Of course, wine is served with every course and the meal is always capped off with coffee (espresso).

The Amalfi Coast is a wedding destination. My roommates and I often saw two or three wedding parties on the weekends having their photographs taken outside one of the churches in town or on the beach. Hotel Santa Caterina was one of the few hotels that had a dining room large enough to accommodate more than 75 people. Thus, we cooked for wedding receptions at least once a week and they encompassed all of these menu courses.

After about two weeks working for Roberto, Chef Domenico moved me to the main kitchen where I started as a prep cook – the one who does all the chopping and cutting of ingredients for the recipes that would be prepared that day- and as the saucier’s assistant. Alessandro (the saucier) was the chef who prepared seafood and pasta.  He was about 6 ft. 4 in. and looked a lot like the American actor, Elliot Gould.

Alessandro was busy making ravioli for the restaurant dinner menu. I watched him pipe the filling onto the dough.

“You bring notebook and I give you recipes,” he told me. Then he assigned me some prep work for a wedding reception that was scheduled for that evening.

The basil stems were covered with wet soil and I paused to wipe my hands on the hand towel tucked into my apron strings. I was separating the basil leaves from the stems and getting ready to wash them.  Placing the stopper in the stainless steel sink, I filled it with cool water and added the fragrant basil, swishing it around to clean off the dirt. Then I caught the floating basil with my fingers and placed it in a white plastic bin perforated with slots to allow any remaining water to drain off. I tore several sheets of paper towels off a roll on the shelf and folded them protectively over the basil before placing it in the refrigerator.

My next task was peeling and mincing garlic cloves. I separated the cloves and placed one on the cutting board. I laid the heavy chef’s knife on top of it and pressed downward to crush the garlic and release the skin. Then I peeled the layers of skin off, exposing the smooth, glossy garlic clove. I set it aside and picked up another one. When the peels were all removed, I collected them all on the cutting board and began cutting, using a fluid back and forth motion with the big knife, releasing the aroma of the garlic.  When I had it minced into a fine paste, I scooped it up and placed it in a plastic container, covered it with damp paper towels and put it in the refrigerator to join the basil.

We purchased much of the fresh seafood that we used in the kitchen from local fishermen. That morning a fisherman had delivered a cardboard box with several huge sea bass, two lobsters and a large octopus. The women who washed the dishes and cleaned the kitchen during breaks and in the evening were also assigned to clean fish.  Two of them were at one of the sinks—one was scraping scales from a large fish and the other was gutting and cleaning the octopus. She wiped her hands on her blue uniform dress and took it to the Alessandro. (The dishwasher girls also bring everyone cappuccino and espresso on little trays at regular intervals and fruit punch in the afternoon. The “coffee break” takes about 20 seconds – just enough time to stir in a tiny spoonful of sugar and toss the espresso down.) 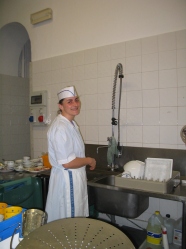 After Alessandro finished the ravioli, he made octopus risotto for the wedding reception. Risotto is made from Arborio rice. Instead of steaming the rice in water, you slowly add broth to the rice and stir constantly until the liquid is absorbed and the rice has a creamy consistency.

“Popoli (octopus), they are strong.” (I think he meant that they were tough.)

He proceeded to show me how to beat the live octopus with a mallet until it was tender, although limp and mushy made a more apt description. I think it would have been easier to just drive one of those motor scooters over it a couple of times. Then he submerged it in a pot of boiling water. I didn’t know that octopus turned purple when cooked, and I was surprised that the boiling didn’t make it tough all over again. Alessandro set some aside to use for a cold seafood salad that they were serving for the wedding and sliced the remainder to sauté before adding to the risotto.

The whirr of the blender was added to the other sounds of the kitchen—water running, pots and pans clanging and the men laughing and chiding each other in Italian over some event I couldn’t understand.  I glanced up at the clock and realized that it was almost time to me to go home. When they are preparing for a wedding reception, the kitchen staff does not get its usual break from 3PM to 6PM.  Instead, they have to work all through the afternoon.

They were busy frying veal and roasting huge fish for the Secondi Piati as I left at 4PM and the pastry chef, Roberto, was decorating the wedding cake.

Posted by Marcia Steidle. Categories: My Stories. Leave a comment